Where do you get inspiration for your stories?

Inspiration comes from various places and situations. Obsesi, for example, is taken from my friend’s experience with her ex, whereas Balada Ching-Ching comes from something that I know happened in real life — a friend’s experience. I have to say the only short story spun out of nowhere is Apa Yang Kamu Lihat di Kartuku, Sayang? [* Maggie’s favorite in the collection]

Which characters in these stories fit you?

I have to say, all of the main characters do. I always think of what I would do or how I would react if I were each of them, facing those specific circumstances.

Tell us about your previous release, Homecoming, and were there any stories you wrote specifically for Balada Ching-Ching?

Homecoming comprises five stories written in English, and was released independently in 2006. The printing was done by a friend. We printed only 1,000 copies. Balada Ching-Ching is somewhat similar.

Its contents are from my collection of short stories that I have written since 2001. No shorts stories in the collection were specifically written for the book, and the story Balada Ching-Ching is more of an adaptation of the original. Previously written in English, I changed the setting and point of view to be more of an Indonesian than a Chinese person in the US.

What kind of emotions are you trying to extract from your readers?

I didn’t write to provide enlightenment. I wanted my readers to see things from a different angle. Dua Sisi, for example, is my defense for getting to know both sides of the story. The simple things in life matter, and I want my readers to be able to identify with the story.

What are you currently working on? Any upcoming works?

I’m currently in the process of promotion, obviously. The market for short stories has declined in 2008 and 2009, which is in contrast with what happen throughout the rest of the world. Short stories are booming in Asia and Europe, including Eastern Europe, with different awards given.

We have different awards for short stories, but most of them look for those written in typically artistic Indonesian, which you can see is not my style. Even Gramedia asked me to write a novel for the next publication, possibly next year … but we’ll see. I’ll probably come up with between nine and 12 pages of short stories, longer stories this time.

What I really want to do is promote the art of the short story as a whole in Indonesia, more as a tool of self reflection than entertainment; to show people it doesn’t take artsy language abuse to create great stories. 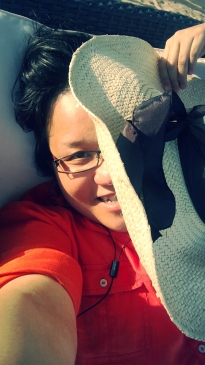